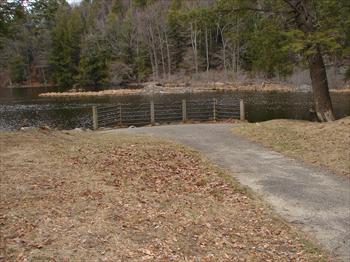 “The topography and landforms surrounding Cushman Brook and Puffer’s Pond are more typical of the Berkshire Hills than the Pioneer Valley as they are glacial hills of sand and gravel deposits that are poor for agriculture” (D. Master’s Thesis).

The sand, gravel and rock deposits were left thousands of years ago as streams from the hills in what is today Shutesbury, Pelham and Leverett flowed toward glacial Lake Hitchcock which covered the Connecticut River Valley. The deposits formed the hills and plains surrounding Puffer’s Pond, sitting atop a layer of bedrock, which is exposed along Cushman Brook where years of erosion have cut through the relatively loose soil layers above.

Priority & Supporting Habitat for Rare & Endangered Species
The entire Cushman Brook-Puffer’s Pond riparian corridor is designated as Primary and Supporting Habitat for Rare and Endangered Species and Wildlife, and the pond has been mapped as Living Waters Prime Habitat by MassGIS. Portions of the Cushman Brook are also identified as Biomap Supporting Natural Landscapes, meaning that large, naturally vegetated blocks relatively free from the impacts of roads and developments buffer and connect Biomap Core Habitat. (NHESP) These designations indicate that the health of the entire corridor is critical to the health and stability of many ecologically sensitive flora and fauna.

The Biomap project, completed in 2001, and the Living Waters Project, completed in 2003, identifies the most critical areas of biodiversity in Massachusetts. Biomap depicts the most viable habitat for rare species and natural communities, especially the viability of terrestrial, wetland and estuarine components of the landscape. Living Waters includes “rivers, streams, lakes and ponds that are important for freshwater biodiversity in the Commonwealth.” (NHESP, Massachusetts State Park website) These 2 core habitats, which encompass a wide variety of biodiversity and rare species, are determined by “documented observations of rare species, natural communities, and exemplary habitats.” The Massachusetts Natural Heritage and Endangered Species Program confirmed that the Wood Turtle (a reptile) and the Bridle Shiner (a fish) have been observed in the study area and help it achieve these habitat designations. The Living Waters program recognizes most of the land surrounding the Cushman Brook as a Critical Supporting Watershed.

Water Quality & Sediment (Bathymetry)
The water quality of Puffer’s Pond can be attributed to the Cushman Brook which flows into the pond, to surrounding land uses, and to the geomorphology of the area. The tributaries that contribute to the Cushman Brook pass through a relatively undeveloped area with forested hills and small open meadows. Although many private residences may use individual wells and septic systems, it does not appear to dramatically affect water quality. Cushman Brook is one of the cleanest and most pristine aquatic habitats left in the Town of Amherst. It is a prime fishery with native brook trout, and there is minimal development in the upper parts of the watershed.
[]