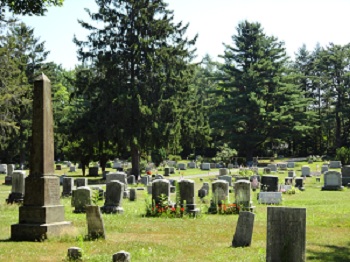 Other Cemeteries in Amherst:

History of Cemeteries in Amherst


The ''burying place,'' or West Cemetery, was officially laid out in 1730 by Hadley's town committee. The West Cemetery was the only cemetery in town for 90 years until December 8th, 1817. On this date a committee was appointed to consider and report on the expediency of establishing one or more new burying grounds in town.

At a meeting held on March 2, 1846 the town voted to raise $200 to pay the expenses for planting shade and ornamental trees at the center of the North and South Cemeteries. In 1873, The North Cemetery was enlarged and a well dug.
Wildwood Cemetery is Amherst's only privately-owned cemetery. It was designed and laid out in the late 19th century by Austin Dickinson, who is buried there.